Writing gave birth to the notion that facts could assert themselves, independent of any speaker. A mind independent world became a possibility.

Projective images gave birth to the notion that the world could be seen as it is, geometrically and quantitatively, and thus mind-independently.

Before projective images and writing, the very notion of a mind independent world made no sense. Now we are so immersed in texts and images that we doubt the reality of living.

A single person alone in a room might be tempted to be a solipsist. Raised in Western society, the solicitations of solipsism under such conditions are almost irresistible. If such a person were to employ the everyday Cartesian language with which we describe experience, there would be a dead inanimate room, represented and hence observed by the mind of the person. Experience may seem to be the result of perception, constructed on the basis of the senses, which is complemented with unobservable stuff loosely described as memories, thoughts, reverie, imaginations and such. The sum of the private stuff, together with the rooms insistent existence, comprises the “now” for such a person.

Oddly, that same person, if told of two disasters that are indexed to very different points in time, will care greatly about one (a massacre, say, in contemporary Absurdlandia), but will be entirely unmoved by another (a similar massacre occurring, say, 400 years earlier). The person in the room is in no way capable of influencing either event. Yet one, by virtue of occurring contemporaneously (in calendar time) is an affront to humanity, the other is a historical detail. END_OF_DOCUMENT_TOKEN_TO_BE_REPLACED

Not only do we have a right to assert that others exist, but I should be inclined to contend that existence can be attributed only to others, and in virtue of their otherness, and that I cannot think of myself as existing except in so far as I conceive of myself as not being the others: and so as other than them. I would go so far as to say that it is of the essence of the Other that he exists. I cannot think of him as other without thinking of him as existing. Doubt only arises when his otherness is, so to say, expunged from my mind. (Marcel, Gabriel. Being and having. Read Books Ltd, 2013.)

Anti-solipsism is a thrilling idea. Not “being against solipsism”, but this reversal, this inversion, allowing existence to be something that those people have, and to recognize that there is no “I” that can be aligned with them. I look in the mirror, and I grant you that that person I see exists, but he is as opaque to me as any other. Furthermore, anybody who exists can die. That is true of everyone I encounter. But my own death is not something I can experience. I cannot wink out of existence.

If we refuse to believe in the cogito underlying experience, but we let experience be what it plainly is, then we are identical with its content. Is this any different from the repeated exhortation in the Chhandogya Upanishad, Thou art that! (Tat tvam asi!)
Or when Merleau-Ponty insists

We think we know perfectly well what ‘seeing’, ‘hearing’, ‘sensing’ are, because perception has long provided us with objects which are coloured or which emit sounds. When we try to analyse it, we transpose these objects into consciousness. We commit what psychologists call ‘the experience error’, which means that what we know to be in things themselves we immediately take as being in our consciousness of them. We make perception out of things perceived. And since perceived things themselves are obviously accessible only through perception, we end by understanding neither. We are caught up in the world and we do not succeed in extricating ourselves from it in order to achieve consciousness of the world. (Phenomenology of Perception, Chpt 1)

This is giddying. Solipsism is a hat we all tried on in our teens. It helped us to develop a scepticism about closed minds. Anti-solipsism is another thought exercise. It seems perfectly coherent. And not a million miles from the Buddhist concept of Anatta.

Post scriptum: Here’s a picture I did. It’s Solipsist vs Anti-Solipsist. 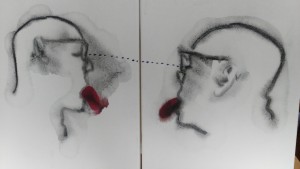 Many practitioners of science have uncritically sought to provide the view from nowhere. This, it is widely agreed, is not something that can be delivered.

An alternative and more attractive overarching ambition is to be the voice from no one.

Logos gives us the notion of an impersonal order, but never as far from us as the elements of the Grand Unified Theory sought in physics. Logos is word of law, both conventional and natural. Positivist science has failed to recognise our own involvement in its being.

Rhema is uttering. In the act, the subject arises, and the goal is to move from disjoint, local agents who bicker, towards the facilitation of joint uttering, jointly bringing into being. Rhema is an act of creation, as the appearance from nowhere of a positron and an electron. Being necessarily has a complementary character. It is not the insistence of one being over another.

And in speaking together, all the beauty of music lies before us as models.

Wohlklang or Einklang make good targets for a collective voice

I’m not aware of any other contemporary thought current that calls itself pharisaic.  The Pharisees seem to have played the role of the fall guy for as long as I can see.  They are overly legalistic, without understanding the spirit; they are the deviant, the misguided, the wrong.

It’s a bit like a domain name registration.  It was free.  It’s not associated with anything anyone else will lay claim to (I hope), nor take offence at (I hope).

I have come to learn that the Pharisees were the forerunners of rabbinic Judaism. I know little of the structure of Judaism, except that it is complex. It is my wish to appear unthreatening, respectful, and formed in my own way.

If you say you’ve got a church, people will quickly ask about your God. Most of my friends would describe themselves as Atheists. All of them grew up in a consensus that matter moves by mechanical force, and agency is something rather mysterious, but surely individuated, residing in (primarily human) individuals. If you assume all this, then you probably have an opinion about the God question.
If you can get away from the assumptions about mechanisms and volition, then the question of God or Not becomes meaningless.
So what if we recognise that it is impossible to adopt an unaccented, culture-free, standpoint.  From where I’m standing, I see some variation in how things are and how things are understood.  What are the kind of things that co-vary with Abrahamic faiths, and with those other things that we might (with due awareness of our biases) describe as faiths, in full awareness that we see this as Christians, from a Christian culture?

I founded this church to have a voice that was unauthorized. Since then, it has acquired its own theology, on par with many others. The P-world construct is an attempt to deal with the paradoxes and incompletions that arise in trying to relate immanence and transcendence. This is how God functions in most religions. Latour says that the verb “to exist” is the most disrespected verb in the dictionary. He is right. For talking of what simply is, that positivism, is a religious move. I had no idea. I have since discovered the aesthetic turn in religious studies. That is a related insight!

There are minds or world views which, if adopted, make atheism logically incoherent, because the God claims are simply claims about what is. And like everyone with a security blanket, these theists are not to be dislodged from their claim to realism. For we all must claim to be realists, because we don’t want to be seen to be committed to what is not. But being does not necessarily subscribe to the law of the excluded middle. “To be or not to be” may not be a dilemma.

Everything happens all at once.  Inching forward, at a steady rate of one second per second. When we tell a causal story, such as describing the action of a machine, we pick out one strand in that whole, prioritising it over all others, and generating an artificial cleft between foreground and background. But everything is part of everything, all flowing together.  Heraclitus’ vision, I think.  Among that we pick out agents and the inanimate, and bring into being shitty gods, minds, subjects.

This is not a moving slice through a 4-dimensional manifold, as Parmenides and Newton would have it.  This has very many more dimensions, for it must accommodate your unfolding locus of experience and mine.  The number of dimensions is not at issue, really.  Professor Bohm seems to assure us of that.  What matters more is how one treats the divide between subject and object.  How we apply the carving knife, for the image we are carving is our self portrait.  Like a mewling infant, we do not know what we look like, but we react anyway, sticking out our tongue at the world as it sticks its tongue out at us.

Here is a little squib I wrote that suggests that we can discipline our application of mathematics to our understanding of the world if we treat agency in the right way. Light hearted stuff.

The subject-object dichotomy needs to be overcome.  Insisting on its trumps-everything-else realness is not sustainable.  But language starts to fail at that point.  The term “experience” arises, and we do not know what to do with it.  But how else do you ground any tale of worlds and minds?

Happily the term “language” itself is crumbling for me.  A rather old-fashioned faculty psychology has insisted that there be language, with syntax at the non-beating heart of it’s computational breast.  In insisting on systematicity, it forgot about voice, and the power of uttering.  Subjects now start to abound.  They are collective, and partial, and overlapping, and meaningful.

How then to speak?